In addition to its volunteer program at the Wild Animal Rescue Center in Petén, ARCAS hosts volunteers at its Sea Turtle, Crocodile and Mangrove Conservation Project on the Pacific coast near the village of Hawaii, 7 kms east of the main resort town of Monterrico.
In terms of atmosphere, Hawaii and Petén couldn't be more different. While Petén is humid and heavily forested, the Hawaii area is breezier, more open and, unfortunately, more heavily deforested. While the Petén region is experiencing heavy immigration of land squatters and other associated problems, the southern coastal plain (being the breadbasket of Guatemala) has been settled for a much longer time, and the beach area is experiencing rapid tourist development. There is no Caribbean influence on the south coast, only the ¨ranchero¨ cowboy style mixed with the influences of resort tourism. 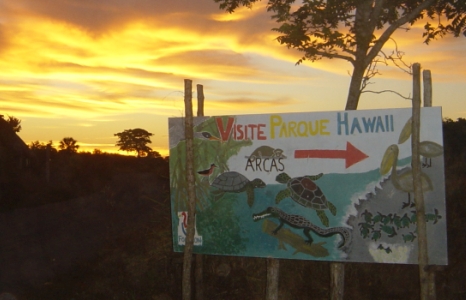 The Rescue Center in Petén tends to be focused on the wildlife rescue and rehabilitation work carried out there.

The Hawaii project, on the other hand, is much more about extension, reaching out to the five communities to help them develop sustainably, all as part of the broader effort of the management of the Hawaii Protected Area. Volunteers are encouraged to participate in health, gender, eco-tourism and education projects, but participation in these projects also requires more experience and some degree of Spanish language ability.
Hawaii Volunteers Guidelines

ARCAS’s conservation and community development activities on the south coast of Guatemala are based on the Hawaii Park (Parque Hawaii) where ARCAS hosts over 200 international and Guatemalan volunteers per year. The Parque includes a large central rancho with an office, meeting room, volunteer computer room, kitchen, bathrooms and a laboratory. Nearby are three volunteer houses with bunk beds, lockers and electric fans. Mosquito nets and sheets are provided, but towels are not. The crocodile, iguana and parrot captive breeding enclosures as well as other rescue cages are also nearby.

Eighty meters away, just behind the coastal dunes, are the three main sea turtle hatchery as well as a simple rescue center consisting of recuperation tanks and a necropsy table. A lookout tower is used for monitoring sea birds and mammals, as well as sunbathing. US-style 110 AC power. Accommodations are rustic but comfortable, and with the ocean breeze and roar of the surf in the distance, make for the ideal atmosphere to relieve the stress of modern life, ignore your smartphone for a while, and take in the wonders of the Pacific Ocean.

Three species of sea turtles nest at Hawaii: olive ridleys, greens and leatherbacks. The olive ridleys, which account for about 98% of eggs collected, nest roughly from July to late October, though solitary nesters arrive throughout the year. Along the roughly 10kms of coastline that ARCAS monitors, nesting frequency can be as high as 30 nests per night during the peak of nesting season in August and September. Leatherbacks nest in November and December but are much less common than olive ridleys with only 2-3 nests being recorded per year, and that number, unfortunately, is declining each year as the Pacific leatherback population is most certainly going extinct. Recent years has seen the first Pacific green nesting in the area, with 2-4 nests being recorded per year in August, September and October.

Under a system established in the 1980’s, local egg collectors are allowed to commercialize sea turtle eggs as long they contribute 20% of each nest to one of the @28 hatcheries in Guatemala. Nests are usually between 60 and 140 eggs with an average of 92 eggs. Egg collectors who donate are given a receipt which gives them the right to sell and transport the rest of the nest. Donated eggs are then buried in hatcheries and after a 45-55 day incubation period, the hatchlings are released into the sea.

ARCAS manages two hatcheries: the Hawaii Hatchery on the grounds of the Parque Hawaii; and the El Rosario Hatchery, in the fishing village of the same name, 6 kms to the east.
Turtle eggs are prized by locals as a supplement to their income and diets. On nights that the turtles come to lay their eggs, competition for nests is intense and it is extremely rare that a nest escapes plunder. Turtle eggs are sold to local buyers who transport them to restaurants and egg stalls in the capital and other large towns. 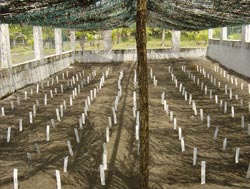 The work at the Hawaii Parque is for night owls, which is why daytime visitors to the Parque often find everyone sleeping! Sea turtles almost always nest and hatch during the night. Volunteers take part in 2-4 hour nocturnal patrols in search of nesting sea turtles. Once a turtle is found, volunteers wait until it has finished laying, collect the eggs and then bury them in the hatchery. They also receive voluntary donations from local egg collectors and extend donation receipts. Hatchery data is recorded in the data log.

When the nests in the hatchery begin hatching (usually starting in late August) volunteers check the hatchery several times per night and collect the hatchlings. The hatchlings are then measured, weighed and then released on the beach. Many times, groups of children and tourist come to participate in the hatchling releases and volunteers give them short talks about the conservation and biology of sea turtles.

Volunteers assist in releasing the hatchlings and excavating the nests to determine the hatchling success rate, which is usually over 90% in Hawaii. Hatchlings should be released at night or early or late in the day, as close to the time they hatch as possible. They should NEVER be released during the heat of the day as there are more predators and the midday sun will dehydrate them. Hatchlings should be released at the same level of the beach where a turtle would normally nest (above the high-tide line) and be allowed to crawl unhindered to the surf in order that they become imprinted on their place of birth and return to the same spot to nest. Also, they should be released at different points on the beach so that finned predators off-shore don’t get used to a free meal.
The primary aim of the Hawaii sea turtle program is collecting and incubating as many sea turtle eggs as possible, but research is also conducted.

Volunteers assist in measuring nest and sand temperatures, conducting daily crawl counts (counting turtle tracks) and monitoring and recording hatchling success rates. Crawl counts are especially important as they allow us to determine whether sea turtle populations are rising, stable or declining, and they allow us to monitor the effectiveness of our egg-collecting activities. Volunteers take part in these research activities and are encouraged to develop their own research projects.

ARCAS staff and volunteers also respond to the stranding of sea turtles and other marine fauna, coordinating their rescue, treatment and necropsies.

Crocodiles and other animals were once abundant in the south coast, but are rapidly disappearing due to hunting and habitat loss. Crocodiles, yellow-naped parrots, and iguanas are captive bred on the grounds of the Hawaii Park and off-spring are released into the nearby mangrove forests. Volunteers assist in the feeding and care of these animals.

ARCAS believes that environmental education is key in addressing the root causes of environmental degradation in Guatemala and dedicates nearly 50% of its overall budget to such activities. Volunteers collaborate in environmental education activities including teaching extra-curricular classes in local schools, developing curriculum, and conducting beach clean ups, turtle releases and environmental fairs. In the past, volunteers have taken the initiative to conduct “green English” courses, and sea turtle puppet shows and plays and school improvement projects.

Successful conservation efforts in other parts of the world have shown the need to work closely with local communities. This is especially true in a country like Guatemala with its extreme poverty and social inequity, and where the resources and/or will on the part of the government to impose more stringent conservation measures are lacking.

The ARCAS Hawaii project is an integrated project that, while attempting to conserve the flora and fauna of the area also tries to offer local residents economic alternatives to improve the quality of their lives. Among the development activities that ARCAS has carried out, with the support of volunteers, are projects in potable water, waste water treatment, gender, eco-tourism, efficient wood-burning stoves and school construction. Volunteers also assisted in relief efforts following Hurricane Stan. If you are interested in developing your own community project in the area, please let us know.

Please read our “Hawaii Volunteers Guidelines” for more Information about Volunteering in Hawaii.