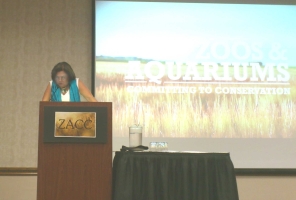 Miriam presenting at the 2013 ZACC conference in DesMoines Iowa

As a member of the National Association of Environmental NGOS (ASOREMA) and the Guatemalan Committee of the World Conservation Union (IUCN), and as a board member of the National Council of Protected Areas (CONAP), ARCAS has worked on a variety of policy issues, including debates about the granting of oil exploration licenses, the formulation of environmental legislation and the regulation of sea turtle egg collection in Guatemala.

It is also monitoring megaprojects, including mining and the proposed creation of a dry canal on the Pacific coast of Guatemala. 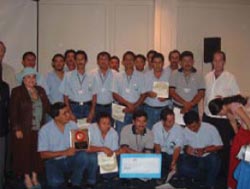 ARCAS is a board member of the Zoos and Aquariums Committed to Conservation (ZACC), a consortium of North American and European zoos administrators working to encourage zoos to make a bigger commitment to in-situ wildlife conservation.

To learn more about what ARCAS does, check our Annual Reports on the publications page. If you want to volunteer please see the Volunteer Information section or email us at [email protected].