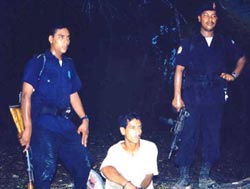 Although it emphasizes the importance of environmental education, ARCAS also recognizes the need to enforce existing national and international laws and works together with its governmental counterparts the National Council of Protected Areas (CONAP) and the Guatemalan green police (DIPRONA) to strengthen the enforcement of wildlife laws in Guatemala, offering training courses, supporting anti-trafficking patrols and carrying out awareness-raising campaigns. Some of these wildlife trafficking enforcement activities have been supported by the Humane Society International, USAID and the US State Department.

Although we can receive confiscated animals at any time of the year, the wildlife trafficking season in Guatemala is April-August, which is the beginning of the rainy season and also the breeding season for most of the animals of the Peten region.

During this season, we receive 20 – 80 animals per week, usually brought to us in battered cardboard boxes. 90% of these are the result of confiscations by police or customs officials at roadblocks or in local markets. 80% of the animals received at the Rescue Center are parrots and macaws, and 90% are juveniles needing constant care. Please see the inventories of animals in the Annual Reports on the publications section of the website. These inventories include animals received in Guatemala City and in Hawaii as well as Peten.

ARCAS receives 300-600 animals per year, between mammals, birds and reptiles. Volunteers at the Rescue Center in Peten can help rescue, rehabilitate and release into the wild these animals.

The sea turtle nesting season in Hawaii on the Pacific coast is July-December, with peaks in August and September. Volunteers are needed to take part in nightly patrols, collect research data and release of hatchlings on the beach. Confiscated iguanas, crocodiles and parrots are also received at the Hawaii Park.

Email ARCAS at [email protected] and join our team of volunteers who come to help us from all over the world.

To learn more about what ARCAS does, check our Annual Reports on the publications page. If you want to volunteer please see the Volunteer Information section or email us at [email protected].